Vogue editor Diana Vreeland once declared “Fashion is part of the daily air and it changes all the time, with all the events. You can even see the approaching of a revolution in clothes.”

From the corset to the kimono and even the revival of the barong tagalog amongst young Filipinos in the diaspora, the shift in garments reflects the way society views its people, particularly its women.

In the Philippines, such is the case of Filipiniana gowns, worn by women beginning in the Spanish colonial period, continuing to the various ways Filipino wedding traditions are re-interpreted today.

Discover more about this symbolic Filipinx garment below.

Googling the term Filipiniana can be confusing. Its real meaning can be hard to pin down, but its actual history does reveal several forms: the baro’t saya, the terno, the Maria Clara, and the traje de mestiza. You could then say that Filipiniana is an umbrella term that spans different styles of Filipinx dress. As Spain colonized what is now the Philippines, it transformed a mostly animistic set of kingdoms into one, Christian-majority society. It brought with it a more patriarchal form of ethics, influencing women to cover up more modestly. As such, the baro’t saya came to be: a loose ensemble composed of a baro, a fine fabric blouse fitted with butterfly sleeves, and a saya, an elaborate skirt made of plaid or striped cotton.

This was inspired by costumes donned by statues of the Virgin Mary. Often, this was also layered with a kerchief-like shawl called the pañuelo, and an overskirt made of darker, thicker material known as the tapis, allegedly an assertion of native pride.

With this turn of attire, showing off certain body parts such as the foot or ankles became taboo. 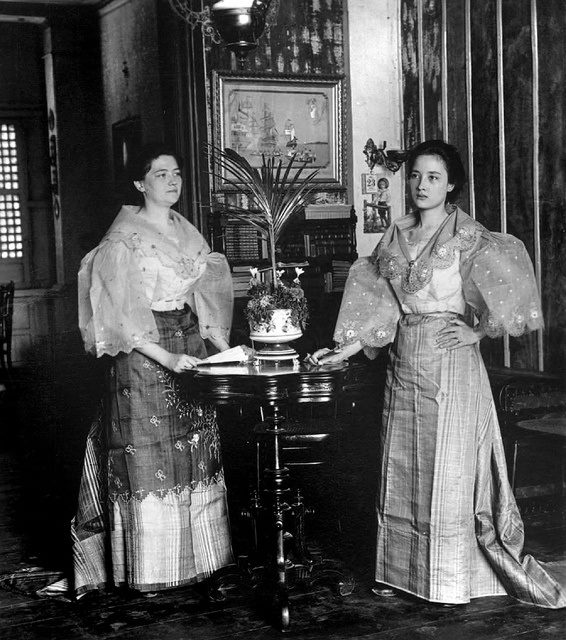 Through centuries of Spanish rule, the baro’t saya also evolved with ever-changing trends. In the 1890s, what emerged was the Maria Clara, named after the heroine of the novel Noli Me Tangere published by Dr. Jose Rizal. Maria Clara traditionally represented the ideal woman: beautiful, conservative, and adherent to the prevailing Catholic values.

The ensemble transformed, now comprising an elaborate pineapple fiber blouse called the camisa, a more flared and billowy version of the saya skirt, a pañuelo now made more secure with gold brooches and pins, and an opaque tapis overskirt.

Today, the Maria Clara is worn during folk dance and theatrical performances, and occasionally chosen as a political or bridal attire.

At the end of the 19th century, Spain’s dominance began to decline, as America emerged as a new colonial power. Coping with this change, many Filipinxs began asserting their identity through costume, adapting a Hispanic dress into something distinctly theirs. Eventually, the Philippines was acquired by the United States, incorporating it into its own territory - and culture. As such, traditional styles became highly influenced by Hollywood’s latest trends, culminating in the Traje de Mestiza. When roughly translated, traje is Spanish for dress, while mestiza, denoted a woman of mixed heritage.

This ensemble is, in fact, a more refined Maria Clara, with a more shapely and modern silhouette that retains its detailed embroidery. Now, the camisa became a clinging bodice, while the saya began to look more exaggerated, bursting out with a train.

One of the most prominent styles of Filipiniana, terno is actually a Spanish term that means “to match”, comprising of both a matching blouse and skirt. The garment started to be worn at the cusp of the 1900s, different from more decorative versions in the past.


From the Traje de Mestiza, the terno became more seamless and elegant, doing away with the cumbersome pañuelo and tapis. It now comprised a matching blouse and skirt, crafted with sleeves shaped like clipped butterfly wings. Its neckline also lowered, contouring the bosom, and nipping at the waist to sharply trail at the hem. Other touches were sometimes added, including draping, shirring, and pleating.

Women often wore the terno during special events, such as processions, pageants, and political gatherings, particularly at the Malacañang Palace. In more recent decades, ternos were notably worn by former First Lady Imelda Marcos, controversial for their showy luxury while Filipinxs back home suffered in poverty.

Walk on the streets of any Philippine city today, and you’ll notice Filipinxs today have given way to wearing jeans and t-shirts. The Filipiniana (in particular the terno), once a fashionable item, slowly fell out of favor among those who want to avoid being associated with the excesses of the Marcos regime.

To many, it has also become a costume, according to Gino Gonzales, a scenographer and lecturer at Ateneo De Manila University. Gonzales famously curated and co-wrote a book titled Fashionable Filipinas: An Evolution of the Philippine National Dress In Photographs 1860-1960, while also moderating the popular Instagram @fashionable_filipinas. In countering this, Gonzales suggests re-examining the terno, advocating more mindful interpretations without tampering with its distinctive character.

A post shared by Philippine National Dress 🇵🇭 (@fashionable_filipinas) on Jun 28, 2019 at 3:10am PDT

Luckily, there have been many attempts to promote the modern Filipiniana, including the highly publicized TernoCon. In this elegant, star-studded gala, many of the Philippines’ top designers parade their interpretations of the Filipiniana down the runway, ranging from fantastical, birdlike pieces to dresses that proudly don indigenous patterns.

Want to incorporate your own version of Filipiniana into your Filipino wedding?

Shop our collection of Filipino wedding accessories, all handcrafted by artisans in the Philippines.